Bags
Yes bags. bags of them. thats what I have. I'm always looking for the lightest way of transporting my stuff. I've done lots of panniers. too much too heavy. I'll fill them. Need to lose the front ones.
So just front panniers and bar bag. panniers 1200kg total. frame 600g. That works better.  No problems and all my gear sqeezed in for a camping tour.
But if I'm not camping what can I get away with. I've got this huge Canvas basic Raleigh branded saddlebag. Obviousley a Carradice copy. I've used this as hand baggage. Holds about 24 litres and a lot lighter than Carradice offerings.
When I was young and fit and crazy I used to Youth Hostel a lot and weekends or short breaks or even a two week tour. I used this for everything. No Barbag or anything, not even jersy pockets. It all had to fit in this Carradice bag the same as this.  This is a 1976 model. Never use it these days must sell it.
I'm always looking at ways to lighten the amount of weight my sorry ass has to drag up those hills. I don't particularly like hills. Suprised? No, didn't think so. I'm big and heavy. My bike has to be big to accommadate me so I'm on a loser but I do try. Baggage is one thing I can try and lose a bit of weight on. I've read about stuffsacs so thought I'd give them a go. But I came across the bag in the picture on e-bay. It's a Carradice Frame Bag. Discontinued now but it was only £6 and weighs 300g. I reckon it will be about 30litre volume. It's also padded underneath, plus it can be used as a rucksack for trundling the bike around the airport or station. It is not waterproof. Showerproof, yes. But I always wrap everything in a bin bag just to be sure. It's done a lot of trips [see tours] and works well. It's also a good shelf for stapping things to, as in the third pic.

I bought a used Dawes Galaxy recently. Impulse purchase again. Oh well. It came with a bag attached. It turns out to be this large Carradice bag. But it's not cotton duck material. I think it's Carradura whatever that is. However it seems as big as the Carradice Super C  but a lot lighter. I think this may feature as a future touring bag as it seems big and good enough for B&B tours at least and less wait for me to drag up those hills. A big plus it comes with it's own support frame that tucks into a pouch on the back of the bag. Great design, can't understand why they still don't do them. 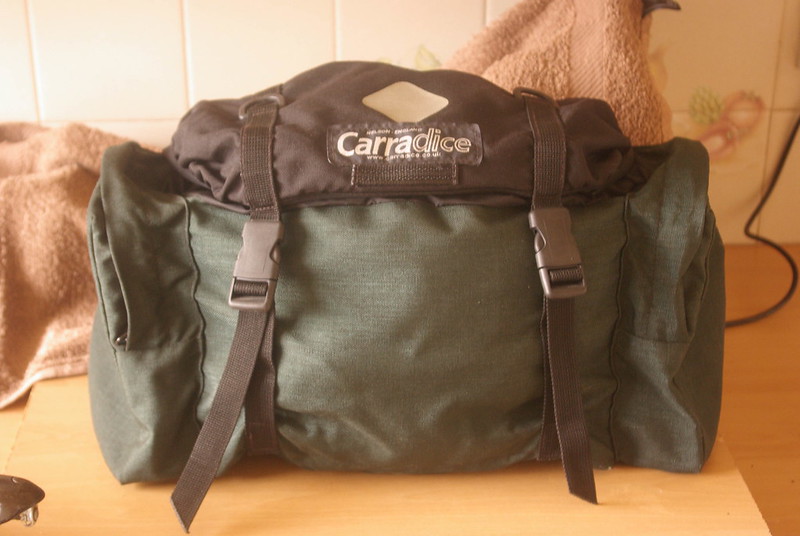 The bag above was given a good test this year as I used it for my Portugal trip. It swallowed all my gear with ease and I did not really notice it on the bike except when I was cursing my way up hills, but I do that anyway. It was very stable even when I was out of the saddle. The only downside was attaching it to the bike.  Fastening the retaining straps to the Brooks saddle was close to impossible as the weight is pulling against you all the time you are trying to attach it. I gave up in the end and transferred my gear to a carrier bag and rucksack to carry inside each night. I need to find a quick release system for next time.  Here it is loaded on the bike, with a few bits strapped to the top. 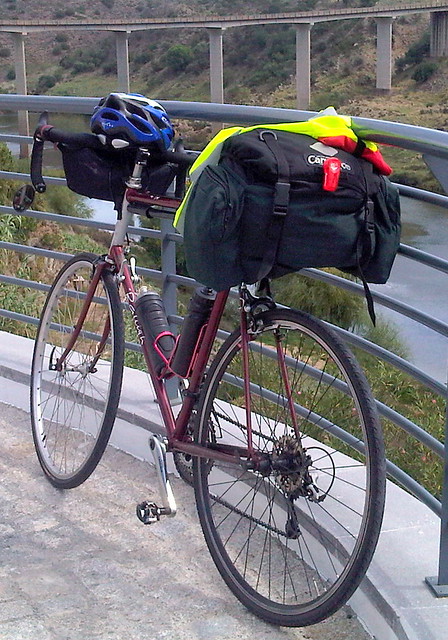 Now here is a thought


On my last tour I took the large Carradry/Carradice saddlebag. It was voluminous and carried all my gear with ease. It was also a pest. A nightmare to take on and off the bike as undoing the straps meant shifting the gear in the bag to get at them. Got to be a better way. I resorted in the end putting my regularly used gear in a swim rucksack and just lifting that out of the bag each night and leaving some stuff on the bike. This resulted in my Kindle being nicked one night.
So I've been sorting out a quick release system and think it's done. But I also got to fancying one of those Carradice SQR Tours. They are £80 though and heavy with the SQR. Hmm.. Now then. I've got a set of those cheap panniers that SJS sell on e-bay. I've found them reasonably light and very tough material. They are also the Tour sort of shape. I paid £10 for two posted so they are cheap enough. I set to and this is the result. It's very stable, takes all my gear and unclips in seconds. Even comes with a carrying handle. Used a copper pipe, rear wheel QR skewer and I think thats it. I may fit a bracket in case it touchs my thighs when riding but works for me at the moment. I could also sew some straps on top for a jacket but there is space inside for that. You don't need the QR as a threaded bar would do but this way I can also use the system for my saddlebag. The ex pannier just drops over the bar as it would on a rack. May be useful idea for someone. 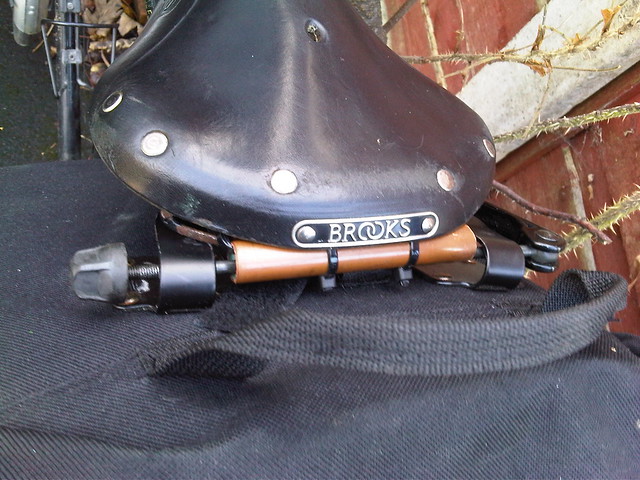 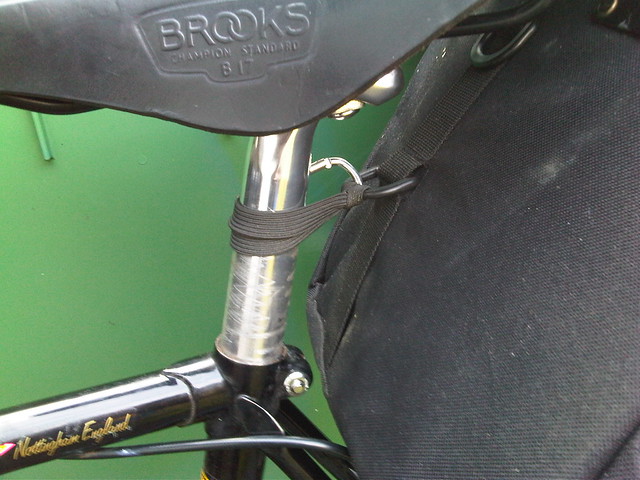